"The purpose was to seek the concrete numbers that prove the Child Lures program is effective in student retention of concepts related to sexual abuse, abduction, and other heinous crimes upon children. Through the pre and post-testing comparison of numbers, the overall growth in the experimental group provides a foundation of proof that the objectives sought by the program's author are being retained through current and previous exposure. It is also proven that a continuous refresher course is needed yearly in order to keep the objectives of the program in the child's daily working memory. One may even venture to say that the program should be taught more than once a year and become a staple in all school counseling guidance courses that span the personal safety realm of district assigned curricula."

Data supports the importance of teaching every student, every grade, every year.

The strength of this study is not only the breadth of years (6) and depth of student participants (38,000 in 1,800 classrooms), but the consistency of annual classroom instruction presented by uniquely qualified Prevention Educators teaching such sensitive topics. Holly's House Prevention Educators are also trauma-informed and trauma-responsive. Think First & Stay Safe™ continues to be taught in all five counties; the study will be updated to include 2017-2018 and 2018-2019 evaluations when the new data is available. 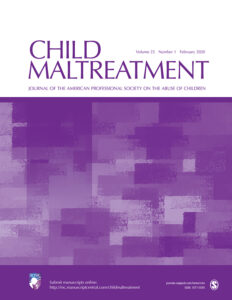 In partnership with the University of Evansville (in Indiana), Holly's House conducted a first-ever study on increased rates of substantiation for children who went through a prevention education program (Think First & Stay Safe).

Researchers were able to document that children exposed to the Think First and Stay Safe™ program are 12.4% more likely to disclose.

A summary of the study's data outcomes are as follows:

NOTE: After the completion of this research, the forensic interviewer involved in the research study, Molly Elfreich, recounted several firsthand interactions with children who stated point blank that it was not until the Think First & Stay Safe program came to their school that they realized they were being abused and felt compelled to disclose. (Elfreich et al, 2019) Molly Elfreich also stated, “Children exposed to the Think First & Stay Safe program were more likely to disclose abuse during the forensic interview. The kids who did receive TF&SS and did disclose had more detailed stories and were more likely to be substantiated. Their outcry was more definitive. Once they did make the decision to disclose abuse, it made the disclosure more likely to be followed through.”

This study, Sexual Abuse Disclosure Mediates the Effect of an Abuse Prevention Program on Substantiation by Elfreich, M., Stevenson, M., Sisson, C., Winstead, A., Parmenter, K,, was published in the Journal of Child Maltreatment in September, 2019. Researcher Molly Elfreich also presented the study’s findings at the American Professional Society on the Abuse of Children Colloquium on June 22, 2019.

Guidelines for Programs to Reduce Child Victimization:
A Resource for Communities When Choosing A Program to Teach Personal Safety to Children
Helpful Resource for Schools & Other Child-Serving Organizations, by NCMEC 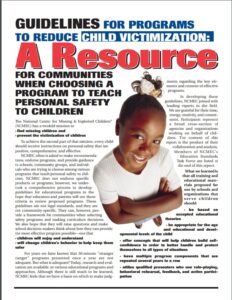 In 1999, Jennifer Wooden Mitchell, National Child Safety Expert and Co-President of Child Lures Prevention/Teen Lures Prevention, was invited to serve on the Education Standards Task Force at the National Center for Missing and Exploited Children (NCMEC) in Washington, DC.

Together with other Child Safety Experts (including Dr. David Finkelhor and Dr. Sandy Wurtele), ​as well as Ernie Allen and NCMEC staff, Jennifer and the Task Force researched, wrote and published Guidelines for Programs to Reduce Child Victimization: A Resource for ​Communities When Choosing a Program to Teach Personal Safety to Children. These guidelines include helpful checklists and a curriculum scorecard. Think First & Stay Safe™ and Teen Lures TV Newscast ™ curricula meet and exceed the Guideline's recommendations.

"While Director of Student Services for the Round Rock Independent School District, Round Rock, Texas, I undertook a district wide evaluation of the components of the district's Safe and Drug-Free Schools Program. The district contracted with Dr. Robert Landry, an outside professional evaluator to conduct the evaluation. The evaluation was undertaken to determine if the district's SDFSC programs were in compliance with the U.S. Department of Education's Principles of Effectiveness.

One of the major prevention components was the Child Lures Prevention Program (Think First & Stay Safe.) The Child Lures Prevention Program was taught in all of the district's eighteen elementary schools. Sample schools were used in the evaluation. In one school, Anderson Mill Elementary, subjects were administered a pre-test and post-test in Pre-K-3. Our evaluator used statistically sound research methods and determined that 'subjects were found to have performed significantly better on the post-test. This indicates the programs in place are contributing to the constructs identified in the pre and post-test. Students' increased performance demonstrates a significant increase in their understanding and skills associated with the constructs tested. The major focus of the elementary program was the Child Lures Prevention Curriculum.'

As an educator and preventionist for more than 30 years, I commend the development, promotion and implementation of the Child Lures Prevention Program, a program that was shown effective using scientific research methodology. Congratulations on having a program that safeguards our children and assists parents, teachers and the community to rear our children in an unsafe world." 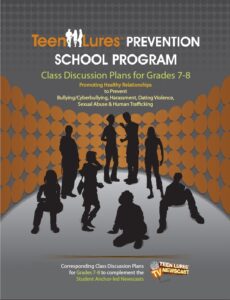 In 2008, a decision was made to separate the Grades 7-12 scripted Lesson Plans from Think First & Stay Safe™, rename them "Teen Lures TV Newscast" Class Discussions and add Student Anchor Scripts & corresponding Video News Clips so teenage students could be active participants in teaching part of the program. The curriculum includes separate teacher-facilitated Class Discussions for Grades 7-8 and Grades 9-12.

While the above-mentioned "Safe and Drug Free Schools Evaluation" by outside professional evaluator Robert Landry, contracted by Round Rock Independent School District in Round Rock, Texas collected data from elementary, middle schools and one high school, and proved the efficacy of Child Lures Prevention's Think First & Stay Safe curriculum, it was decided the updated edition of Teen Lures TV Newscast required recent evaluations of the specific grades 7-8 and 9-12.

Child Lures Prevention/Teen Lures Prevention encourages schools to evaluate the curriculum on a local level. Utilizing the curriculum’s grade-specific Pre/Post Student Evaluations is strongly encouraged, as results can gauge student progress and retention of safety concepts and prevention strategies. The evaluations can also help pinpoint areas of instruction that may require additional attention.