To make personal safety and teen sexual assault education compelling for older students, the interactive Teen Lures TV Newscast curriculum was created for middle and high school students as an extension of Think First & Stay Safe. Schools can use American Rescue Plan Act (ARPA) funds to purchase this curriculum; “Implementing strategies to meet the social, emotional, mental health, and academic needs of students hit hardest by the pandemic, including through evidence-based interventions and critical services like community schools.”

Teens wanted a program they could call their own. The Teen Lures Prevention student-led TV Newscasts and corresponding teacher-facilitated Class Discussions were created specifically with these students in mind. The curriculum was formulated to deeply involve teens in the learning process via student anchors and peer learning.

Scroll down for more information... 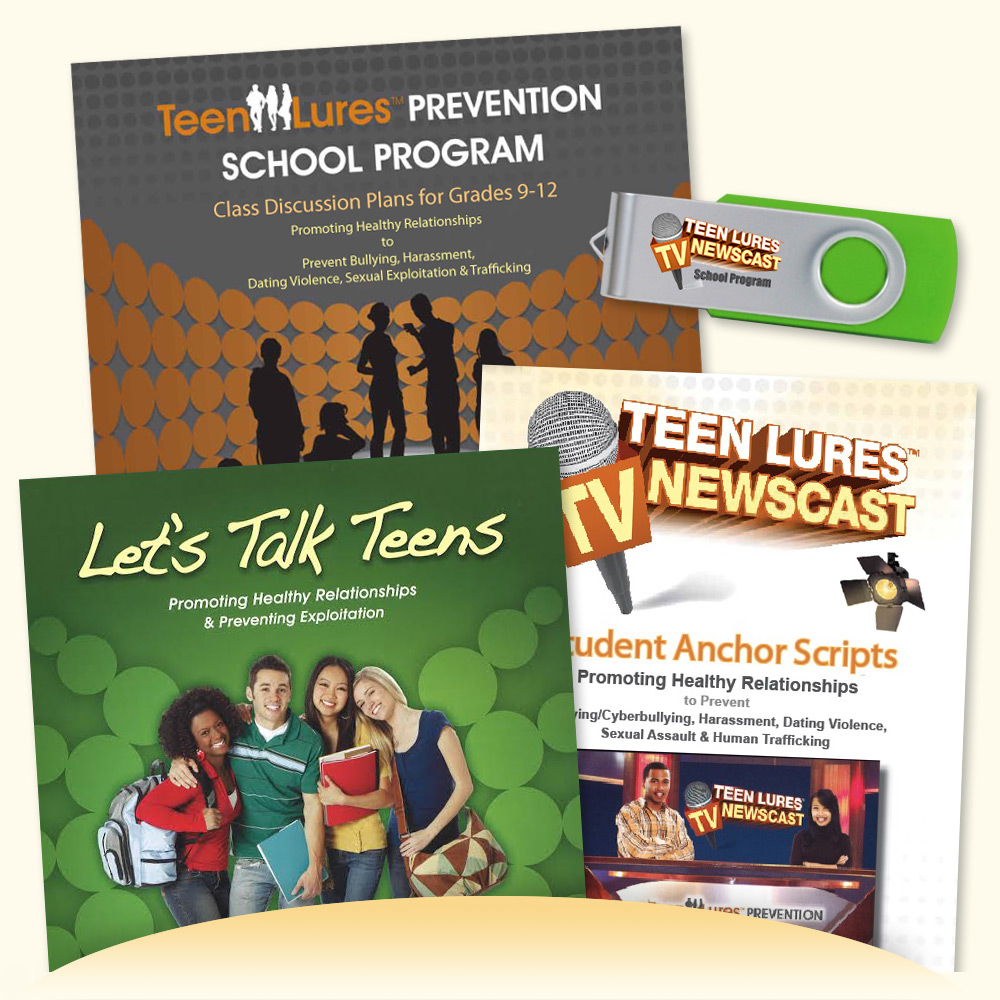 Common questions about the program - answered.

Testimonials and feedback from real educators in the field.

Enlisting the support and cooperation of parents.

“Outstanding program! The lesson plans are perfectly geared toward the age groups of the kids. They actually enjoy the sessions, and the parents always come up to me afterwards to comment on how great the program is. Thank you!”

The goal of Teen Lures Prevention is to bring about peer to peer conversations regarding sexual assault, harassment, dating violence, bullying/cyberbullying, sexting, identity theft, online luring, suicide and human trafficking. By providing a platform to openly discuss these issues and their prevention, Teen Lures Prevention ensures the information teens are sharing about their personal safety is accurate and productive in preventing crimes against them. This generation of teenagers may very well be the first in history to have a direct impact in reducing the incidence of these issues affecting their well-being. Teens can change the world!

Teenagers are the primary target of sexual crimes. They account for 51% of all reported sexual abuse, and teens aged 16-19 are three and a half times more likely than the general population to be victims of rape, attempted rape or sexual assault. All too often, it's a peer who takes advantage. With Teen Lures Prevention, students are trained and motivated to be part of the solution.

Schools provide a safe environment that allows teens to openly discuss the issue of sexual abuse and to reach every student with specific prevention strategies. Schools also provide the ideal opportunity for teens to disclose sexual abuse (only 31% of teen sexual abuse incidents are reported), since school counselors and other mandated reporters are readily available.

Teen Lures Prevention addresses peer-to-peer abuse and also provides an opportunity for youngsters who are having thoughts of abusing others to come forward and get help.

Nearly 1/3 of abuse is by juveniles aged 12-19 using sexual offending behaviors; teens themselves. Therefore, it's important to be able to recognize risk factors involved.

Who is at risk for using sexual offending behaviors?

Teenagers are well aware that sexual crimes happen to teens. They see it on the news, online, on TV and in movies, and discuss it with their friends. By talking openly about these crimes in peer-to-peer formats, this generation of teens can be the first in history to do away with the secrecy surrounding sexual and other predatory crimes and help stop the cycle of abuse that has persisted for generations.

Educators typically witness first-hand the ensuing aftermath of sexual abuse/assault, which can include learning challenges, behavioral problems, low self-esteem, depression, suicide, substance abuse, eating disorders, and teen pregnancy. Educators who proactively support personal safety education help ensure their students come to school prepared to learn and free of the challenges that are often associated with the aftermath of exploitation.

Cell Phones and the Internet are a Teen's Life!

America's teens have grown up connected, and the majority of them regularly and safely interact with people they don't know through social media and gaming. Most teens today know how to block, ignore, delete, or handle unwanted online or electronic solicitations. They tend to use closed social networks (Instagram, Snapchat, WhatsApp, Kik, etc.) as opposed to open social networks like Twitter, because closed networks are inherently safer.

Students who participate in the Teen Lures TV Newscast learn how most lures can also be used online. Students are asked to sign a Digital Agreement to use technology responsibly. Teens discuss the ramifications of posting/sending/sharing cruel, threatening or disrespectful messages or images, as well as inappropriate, semi-nude or nude images. In today's world, responsible use of technology is imperative.

Teenagers with self-confidence are less likely to be victimized or engage in at-risk behavior. Therefore, it is of vital importance to build self-esteem at every opportunity. By nurturing their sense of self-worth, we can instill in students an expectation to be treated with, and to treat others with, respect and dignity. Assuring teens of their right to control what happens to their own bodies gives them the confidence to assert themselves with adults or peers who attempt to abuse them.

Parents will want to be familiar with the program, so when their teens start talking about issues addressed in the Teen Lures TV Newscast (sexual assault, harassment, dating violence, sexting, bullying/cyberbullying, identity theft, online luring, suicide, human trafficking and more), parents will feel more comfortable discussing these issues with their teen(s). Teens should be praised for raising awareness and spreading the messages of prevention, personal safety and protecting one another. 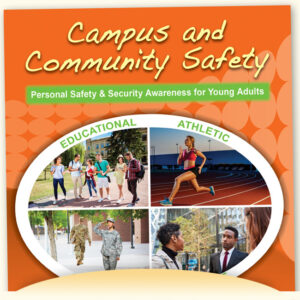 Jennifer Mitchell, Co-President of Child Lures Prevention/Teen Lures Prevention, was one of eight national child safety experts who served on the Education Standards Task Force at the National Center for Missing and Exploited Children (NCMEC). The task force, along with NCMEC staff liaisons and supporting agencies, developed the Guidelines for Programs to Reduce Child Victimization: A Resource for Communities When Choosing a Program to Teach Personal Safety to Children.

The Teen Lures TV Newscast provides an excellent opportunity for middle and high school students to actively participate in preventing sexual crimes against teens and youth. Students serve as news anchors, offering their peers safety solutions in the face of troubling news.

The following video News Clips can be found on Teen Lures TV Newscast.

By introducing each video clip with the scripted lead-in and wrapping up the clip with a closing tag, student anchors provide viewers with specific prevention strategies for staying safe. Video News Clip transcripts and suggested local tie-ins are also included with the scripts. Students are encouraged to incorporate as many local stories and tie-ins as possible.

The Teen Lures TV Newscast may be taped and broadcast in-house on your school/school district's closed-circuit TV system. Schools without broadcast and/or taping capabilities may simply perform the Newscast live, either in-class and for peer assembly audiences. Broadcast on local cable TV provides outreach to families, educators, media, law enforcement and child advocacy groups in your community.

Each Class Discussion includes an introduction, learning objectives, a quick review of the previous lesson, discussion and interactive learning activities and lesson recap. Lesson Plans conclude with a Positive Thinking Skill, in an effort to leave students feeling optimistic after discussing a serious topic.

For Parents/Caregivers of Teens & Young Adults

Being the parent of a teen is a challenging experience, especially in today's high tech world. Seventeen percent of teens are cyberbullied, 20% of teens have sent inappropriate images, and 1/3 of sexual assault victims are 12-17 years old. Most of these crimes are committed by someone known to and trusted by the teen, including peers.

Sexual assault and other act violence crimes can happen to teens anywhere: at home, at a friend's house, at a party, on a date, to/from/at school and work, and even in public places.

The following posters were created for teens to download for free and post anywhere they think would be helpful. Consider posting them on your school's website, in classrooms, hallways, restrooms and locker rooms. We encourage schools to forward the link to other community organizations that work with teens.

Teen Lures Prevention staff support coordinators (available at 1-800-552-2197) are here to answer questions, help with any problems, and provide assistance during program implementation and/or Pre or Post Evaluation of the program. We also offer excellent In-Service training for educators and presenters for an additional fee. For more information, please e-mail us

You can preview the complete Teen Lures TV Newscast™ (and/or Think First & Stay Safe™) curriculum kit for your school or organization for 30-60 days with no obligation to buy. Contact us today for references and more information.