Please be advised that this article deals with sexual abuse and assault of minors.
If you or someone you know has been a victim of this crime, call 800-656-HOPE for 24/7 help and support.

There are persistent myths surrounding so-called "Stranger Danger" - the idea that children should be wary of all unknown persons. Let's take a look at the top four Facts to dispel Stranger Danger myths, and distinguish reality from myth. 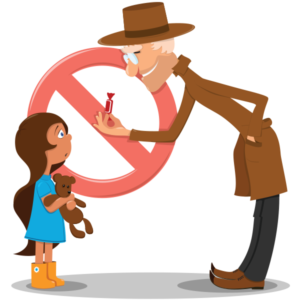 FACT #1: Most children who experience abuse ARE abused by someone they know (and usually trust), NOT by a stranger.

The fact is, stranger does NOT necessarily equal danger. This is also true when kids are using technology. Since over 90% of child sexual abuse is committed by someone known to the child and their family, advising children, “Don’t talk to strangers” could actually put them at greater risk. While most people are kind and caring, anyone can be an abuser, and most child molesters are someone the child knows, not a stranger. Children should be on the lookout for behaviors that are concerning, inappropriate and unsafe - and report them to a trusted adult.

To give you a better perspective of how many children are actually missing though, the National Center for Missing and Exploited Children (NCMEC) helped law enforcement with about 25,000 cases of missing children in 2018. Of these, approximately 23,500 were endangered runaways and about 1,000 were endangered children abducted by family members.

So, how many children are abducted by strangers in the United States each year?

Historically, approximately 100-150 children are criminally abducted each year in the United States.
For instance, in 2015, there were 137 children criminally abducted. These are non-family member abductions, also known as stereotypical kidnappings where abductions are perpetrated by a stranger or slight acquaintance and involve a child who is transported 50 or more miles, detained overnight, held for ransom or with the intent to keep the child permanently, or murder the child.
In 2018 there were 161 AMBER Alerts activated: 97 cases were Family Abductions, 56 were Non-Family Abductions (criminal abductions), 6 were Lost or Missing and 2 were Endangered Runaways. (As of 2/26/19, 155 cases resulted in a recovery, 11 children are still actively missing and 7 children are deceased.)

(It is noteworthy to mention that in 2018, there were 1600 attempted child abductions in the U.S.; 68% involved the suspect driving a vehicle, 34% occurred between 2:00-7:00pm, 64% involved a female child, 35% of the children were between the age of 10-14 years old. For incidents in which the suspect was identified or arrested, only 13% were registered sex offenders at the time of the incident.)*
*Source: National Center for Missing and Exploited Children, Analysis of Attempted Abduction Trends, Data Collected: January 1, 2005-December 31, 2018.

FACT #3: Sex trafficking of children happens in the United States, in all 50 states.

Sadly, children ARE sex trafficked in the United States. Human trafficking occurs in all 50 states.

Victims of sex trafficking can be U.S. citizens, foreign nationals (people born outside the U.S, but living here), children, teens, women and men. Other vulnerable populations, such as foster, runaway and homeless youth, including lesbian, gay, bisexual, transgender, and queer or questioning individuals, are at increased risk of being targeted by traffickers. They may be involved in a trafficking situation for a few days or weeks, or may remain in the situation for years.

According to the National Center for Missing & Exploited Children, in 2018, 3,290 U.S. runaways were likely victims of sex trafficking. Most victims of human trafficking are lured into sexual slavery by clever predators who promise much-needed attention and affection, money, promise of a job or modeling opportunity, new clothes, shoes/sneakers and jewelry or a place to stay. Many victims are "boyfriended" into the sex industry, often unknowingly at first. Still more victims are tricked or lured with drugs, then held captive as their forced addiction takes hold.  By teaching children and teens about the lures routinely used by sex traffickers (the same Child Lures/Teen Lures/Grooming Techniques used by child molesters/sex offenders/rapists), we can begin to cut off the supply to those who prey on - and profit from - vulnerable children.

FACT #4: Most unwanted online solicitations come from other youth and young adults under 25; some come from stereotypical Internet predators.

The majority of today’s youth stay connected throughout the day on cell phones, tablets, game sites and social media, where they regularly and safely interact with people they don’t know. When kids do experience unwanted sexual solicitations, they usually come from other youth and young adults under the age of 25, not older stereotypical "Internet predators." In addition, more solicitations come from prior offline acquaintances than from people met online, and occur in social networking sites. (Source: Youth Internet Safety Survey, 2014, Finkelhor, Mitchell and Wolak, University of NH)

Internet predators who do prey on youngsters, typically target adolescents to engage in virtual relationships by luring them with flattery, attention and feelings of being close to an online friend. In essence, the Affection Lure, Friendship Lure and Ego Lure are being used online. Common effects of these virtual relationships include betrayal and embarrassment.

The Internet predator becomes a more serious threat when he or she obtains a youngster’s personal information, convinces them to send or look at inappropriate images or manages to arrange a private, in-person meeting. Social networking sites are set up to encourage users to share as much, as often and as publicly as possible. These sites are designed to increase the amount of information shared over time. So let’s remind kids to limit how much personal information they share (full name, address, phone number, school, job location, sports team), to regularly check and manually reset their privacy settings and to keep passwords PRIVATE (even from their peers).

While the conventional wisdom of "Never talk to strangers" may seem effective and comforting, the reality is that children, adolescents and teenagers are statistically much more likely to be sexually exploited (in person or virtually) by someone they know, including a peer. It is for this reason that the "Think First & Stay Safe" and "Teen Lures TV Newscast" programs emphasize teaching youth to recognize and avoid situations and behaviors, involving anyone, that can threaten their personal safety.

The Think First & Stay Safe™ Program is PROVEN to work!

You can also Order Online. 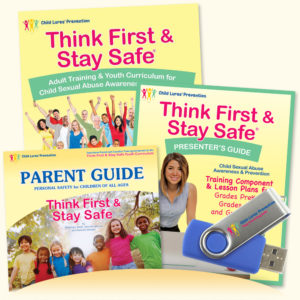